Urban is the new Blue 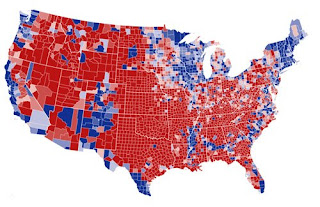 Lets look at the U.S. electoral map in a way that tells us something about urbanization. When we look at the county-by-county breakdown we get a picture quite different from the red state/blue state dichotomy. This map (provided by the NYTimes site) adds pastel red and blue to indicate the strength of party advantage by county. It also shows Obama's clear hold on the urban areas of the U.S. This is a distinction both finer-grained and more interesting than the usual breakdowns of North/South or Rust Belt/Sun Belt. Does it also indicate a mandate for recovery within America's urban centers? Jane Jacobs in "Cities and the Wealth of Nations" pointed to cities as the engines of creation of all wealth. If this is true, the new polarization of American politics is defined at the urban-rural break. Where will this lead?