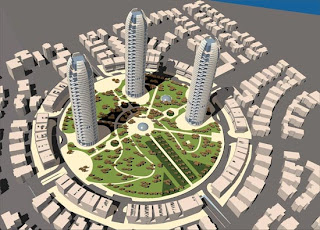 This land is held jointly by a large numbers of owners who have only been able to agree on one thing for the last 50 years: the land does not have enough building rights.  Successive plans have been proposed for the lot over the years, all intended to add to the original 150 housing units and reach a point where the owners and their inheritors will be able to agree and build.  Some of these plans have even passed the full gauntlet of local and regional planning boards.  The most recent plan builds 453 luxury apartments in 3 missile-shaped towers.  Luckily for the people of Tel Aviv, this is evidently not enough for the owners groups, and the site remains a large green dog-walking expanse for the time being.  Our largest carrot field.
This phenomenon suggests a new paradigm for establishing protected land reserves and green space in Israel: Divide and distribute the land to a group of citizens with the caveat that they must cooperate in order to build.