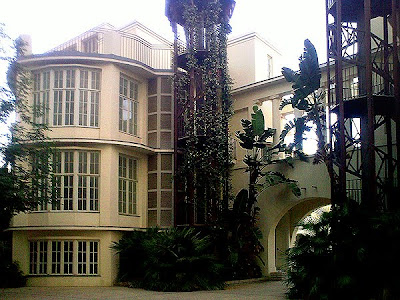 One of the few places in Tel Aviv with the strange ambiance of a Hollywood back lot, this neoclassical assemblage at 7-9 Mazeh Street was the focus of an urban public action in 1992 by the nascent Amutat Lev Tel Aviv.
18 years later, following a painstaking and creative exterior renovation by Architect Orly Shram, the building remains empty and its magical courtyard, shown here, is unused and desolate.
The original building by Architect Joseph Berlin was built as an unusually grandiose apartment building in the early days of Tel Aviv. It was adjacent to the rear entrance of Tel Aviv's Rokach hospital, referenced in a local curse, "May you go in on Balfour Street (the hospital's reception area), and go out on Mazeh Street (the morgue pickup)". This unfortunate location may have contributed to the continuing deterioration of the building as a residential property, and when the hospital parcel was bought for residential redevelopment in the early 1990's, the building was crumbling and practically uninhabited.
Amutat Lev Tel Aviv, the neighborhood residents association, recognized the potential for the building to fill a need for public institutional space. In negotiations with the developer and the city planning commission, they succeeded in re-writing the proposed zoning plan to include acquisition and renovation of the structure as a public library, to be funded by the developer.
It is now 2010. The building, despite its expensive facelift, has not been inhabited since the re-zoning, and no public institutions have opened there. The spacious glass enclosed floors are empty, and the city seems intent on renting the spaces to the highest bidder, hoping that its promises are faded and forgotten.
This post in memory of Gad Gerzon, Attorney, Amutat Lev Tel Aviv's legal counsel from 1991 through 1996.
0 comments

Here's the latest incarnation of our project in Rehovot, now called Rotary Square. On May 24th it was approved at a meeting of the Rehovot planning council, and now moves on to approval at the regional planning board level. I am designing this with my partner Shimon Piltzer.
The plan incorporates 2 historic buildings, including the first store in town, that corner building with the red tile roof. The tower component has leveled out at 18 stories above retail, and we have retained the street wall components along Herzl Street with 5 stories above a retail floor and a shared entry courtyard behind the second renovated historic building.
0 comments